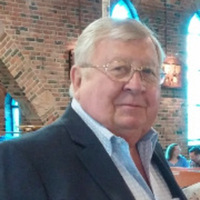 It is with great sadness that we mourn the passing of our beloved husband, father, grandfather and friend John Drury. After cheating death multiple times in his life, his luck finally ran out on May 28, 2020, when he passed away peacefully with his family by his side after bravely fighting for several years a laundry list of health complications. He was 79 years old.

John was born on April 26, 1941 to John “Jack” and Genevieve (Timm) Drury in Detroit, Michigan. He graduated from Redford High School in 1959. Upon graduating, John began what would amount to a 40 year career working for General Motors. Most of his career was spent working in purchasing. John also served in the Naval Reserves in his early twenties. John Drury was a kid from Detroit who grew up living his generation’s view of the American dream. A career, a beautiful wife, a house in the suburbs and 4 amazing kids. John had a passion for many things. His focus was his faith, friends, and family. As a strong man of faith, John served as an usher for St. Joseph Catholic Church where he had been a member since 1979. He especially enjoyed barbequing and offering up free life advice on Sunday afternoons with his family. He also enjoyed classic cars and attending car shows. Christmas was a special time of the year for John and when the term moderation was thrown out the door. There could never be enough Christmas tree lights, poinsettias, or decorations. Even the ladies at the local Hallmark Store knew him due to his vast collection of Christmas Snow Village pieces he had purchased. John also enjoyed travel. He looked forward to trips to Florida as well as his little red cabin in northern Michigan. He made camping at Ranch Rudolf a 45 year family tradition that led to many more lifelong friends. In the end, he had acquired an awareness that a life well lived with family and friends was better than any material possession, except maybe his tv remote control. For those of you reading this, his family would like to thank you for being a part of his life!

John is survived by his loving wife of 55 years Erin (Wray) Drury, his children, Bridget (Erik) East, Katy Drury, Tim (Kristyn) Drury and Brian (Tara) Drury; and treasured grandchildren Riley, Madeline, Claire, Jack, Aidan, Abigail, Luke, Emily, Braden, Anne and Kellen. He is also survived by his sister Barbara Wolford; and numerous nieces and nephews. He was preceded in death by his parents John “Jack” and Genevieve (Timm) Drury; and his sisters Gretchen Lamphere and Alice Tibaldi. John will be cremated, and a mass of Christian burial will be held at St. Joseph Catholic Church in Lake Orion on Thursday, June 11, 2020 at 11:00 am. Masks are required for those attending. A celebration of John’s life will be held at a later date. In lieu of flowers please consider donations to Capuchin Soup Kitchen in Detroit.