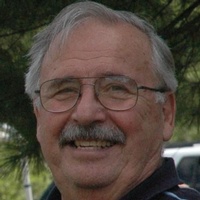 Dennis was born in Highland Park, Michigan on June 18, 1941 to Howard and Lenore (Dixon) Dean. Dennis had been a State Champion Swimmer in High School and married Helen Abbott on July 10, 1971 in Rochester, MI. The couple lived in Madison Heights, MI until Dennis’ retirement from General Motors Chevy Gear and Axle, where he worked as a supervisor over skilled trades. The couple settled in Luzerne in 1996 to their property that they had owned since 1971. Dennis was an active member of Tripoint Church of God (formerly Mio Church of God) where he served as an usher. He was also involved with Angel Food Ministry and Together We Can Food Pantry in Mio. He had belonged to the Carlton Sportsman’s Club. Dennis was an avid outdoorsman. He enjoyed hunting and fishing, and was especially fond of hunting trips to South Dakota with his friend Pat Sposato. He also enjoyed golfing, motorcycle riding, snowmobiling, ice skating, and playing hockey. He enjoyed spending time with his friends and family.

Memorial donations may be made to Tripoint Church of God.

These arrangements were handled by Lashley Funeral Home, Mio, MI.