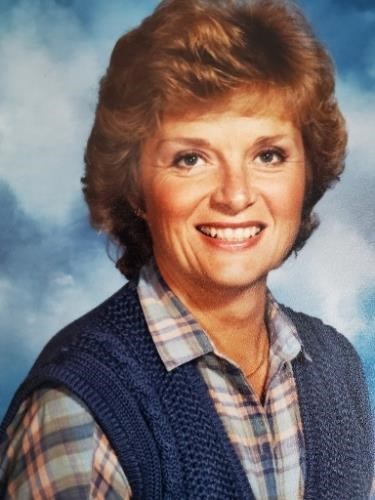 Gustafson, Joann 4/1/1942 - 8/16/2020 Ann Arbor Joann Eleanore Gustafson, a former soprano, longtime vocal music teacher, fierce advocate for public education and host of many legendary dinner parties, died at her home in Ann Arbor on Sunday, Aug. 16. She was 78. Joann was born in Detroit on April 1, 1942 as the youngest of two children to Robert and Eleanore (Jacobson) Berquist.

She graduated from Redford High School in Detroit, then majored in music at North Park University in Chicago. There, she met and later married her classmate, Paul Gustafson. They moved to Ann Arbor, where she earned a Master of Music (Voice) from the University of Michigan. The couple then started a family and began a long love affair with cats. Joann enjoyed 38 years teaching elementary music and conducting middle school chorus at Plymouth-Canton Community Schools.

She became increasingly active in the Michigan Education Association, where she provided training for teachers, and she was also active in her district, where she fought for her colleagues' rights as a union bargainer. A consummate entertainer with a gifted voice, she also kept busy outside of work, with lead performances in opera productions including La Boheme at U-M, the Gershwin and Cole Porter songbooks at Kerrytown Concert House and the Michigan Union, and writing and performing musicals for the Thurston Players among her many credits.

Joann's voice also rang out in the kitchen, where she was inspired by the trailblazing culinary personality Julia Child, her idol and muse. For 15 years she and her late friend, Barbara Thompson, hosted an annual Smorgasbord dinner party, meticulously planning and preparing multiple sumptuous courses of authentic Swedish fare for more than 100 guests each December.

She was a loyal friend to many and a doting mother who inspired her children greatly. Her sense of humor was unflagging, carrying her through a rich life and aiding her through to the end. She is survived by Paul, her husband of 55 years; two sons, Sven (Kristen) and Lars (Kate); three beautiful grandchildren, Niklas, Aron and Lois; and brother George (Jane) Berquist. All will miss her dearly. Contributions in her name may be made to Arbor Hospice, 2366 Oak Valley Dr., Ann Arbor, MI 48103 or arborhospice.org. Generations 2360 E. Stadium Blvd Ste. 15 Ann Arbor, MI 48104